This is a short summary of our aircraft restoration process

Many visitors and fellow museum or aircraft owners ask us about the restoration process. We would like to show you the basics of the painting process, but we are not to discuss questions of the physical restoration itself. In case you need help in restoration, get in touch with us. We do have people who can plan and carry out all the necessary actions, do research on the stencils, design and manufacture them and we have a very reliable and knowledgeable painting specialist.

The fabric on the stabilizers of our Hind had been torn and we had to fix it. We involved a specialist friend knowing the art of fixing fabric covering on airframes. 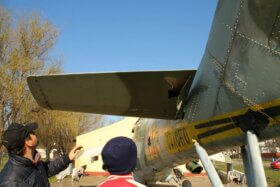 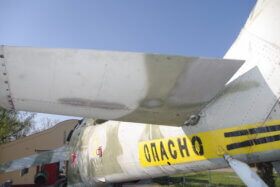 Sanding the surface before the painting process was carried out on a long weekend by at least 7 of us. Our founder, who also supported our painter during the week, carried out the masking and applying the primer. 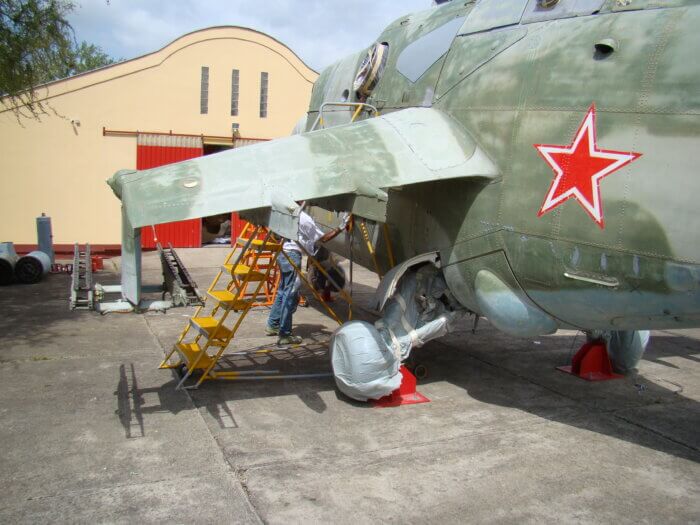 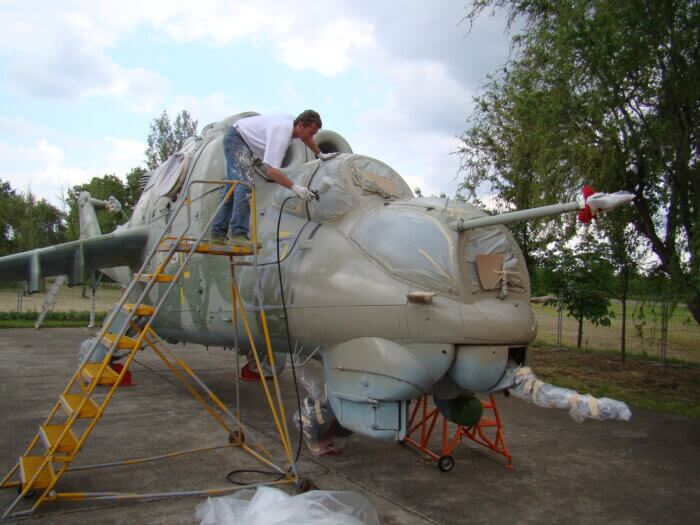 At the end, more group members joined us, to apply the stencils and the insignia. 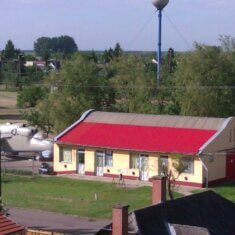 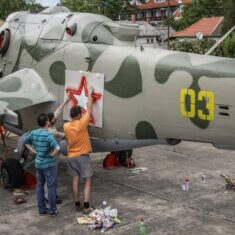 The stencils have been designed and manufactured to match the factory ones. With our founder having researched them, our graphic designer designed the graphics and created special fonts.
We had factory samples to match the original colors. 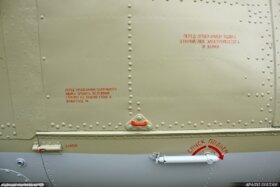 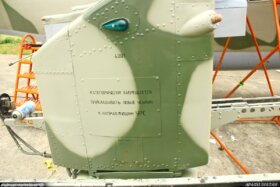 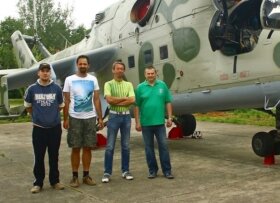 We got our first special trolley after many years from a lovely couple in Nagyiván, where it had been sold in 1991 during the withdrawal of Soviet troops in Hungary. After sanding it a bit, we found part of the original stenciling and our technical specialist (a jack-of-all-trades as we call him), fixed the hydraulic part of the trolley. 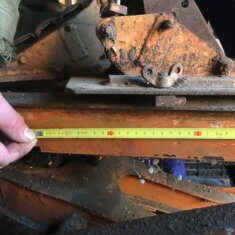 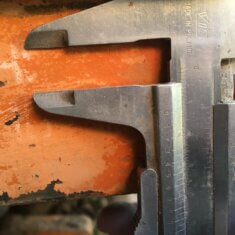 As per original photos (special thanks goes to Gábor Szekeres Gábor and Pavel Belenin), we found out that with new missile technology appearing, the factory kept adding new stencils. We found photos of a similarly painted one among pictures of the 168th Guards Fighter-Bomber Regiment (Georgia). No wonder, since that unit and the one that had had our trolley (the 1st Guards Fighter-Bomber Regiment) both retrained to the new Su-17M2 Fitter-D in 1976.

Much to our delight, we also found the board number (code) of the airframe it had belonged to (red 32!)! 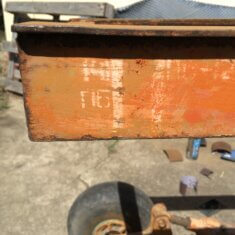 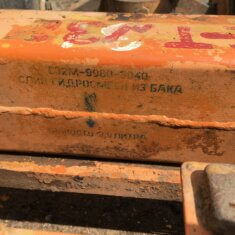 The trolley had been sanded, the rusty parts cleaned, passivated, and then we added the stencils specially designed by our team. (Special fonts made by our designer ‘Consti’, text and layout by Karesz, our founder and the stencils themselves were made by our decorator, Zoli.) 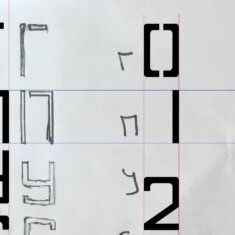 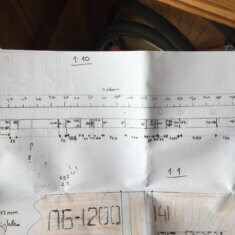 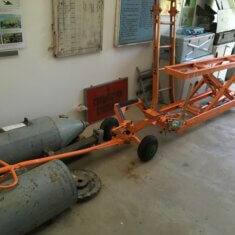 We can show here the aircraft restoration works we did on the Fishbed-L ‘red 41’ that had been put on display by its four owners.
The sanding process was carried out in two phases, while one of our founding members fixed certain parts of the airframe. One owner was working on the cleaning of the exhaust pipe and lower antenna of the RSBN. Our weaponry specialist cleaned and fixed the pylons with his son. 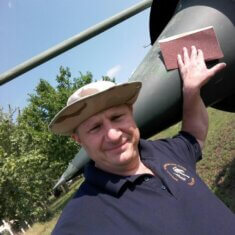 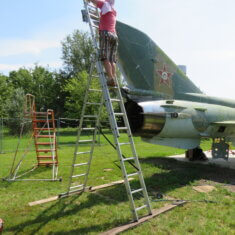 Our friend supplied us with a brand new ABAC compressor and other tools. These helped a lot during the re-riveting of certain parts. He also did photography using a drone. 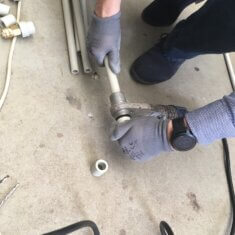 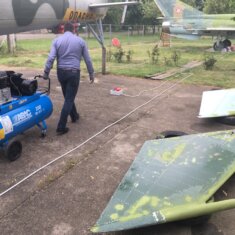 Our founder (who speaks fluent Russian) did a thorough background research on the Russian stencil text. After our graphic designer had created the exact fonts matching the ones used in the factory, we designed the multiple pages of stencils, which were finally manufactured through a printer known well by our decorator. To speed up fast application of stencils, we created a 21-page painting and stenciling manual, detailing the process and the places of each stencil on the fuselage and wings. 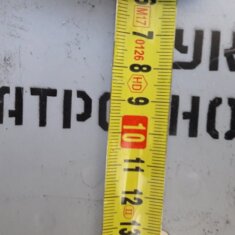 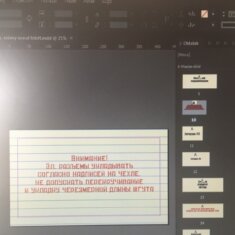 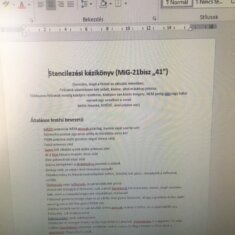 We could not solely rely on paint codes of plastic model makers, as we needed the exact colors. Thank God, we have a factory-finish panel of a Fishbed-L and we have asked Gábor Szekeres, a well-known Hungarian model specialist to help us with info and other panels. After having identified the right shades our museum ordered the primer and the paints and then we pushed the pedal to the metal. We asked our friend, Miki (who had painted the Hind as well) to prepare the machine for spraying and painting it. We has put an enormous effort into it. Since then, he has worked on other MiG-21’s and MiG-15bis. 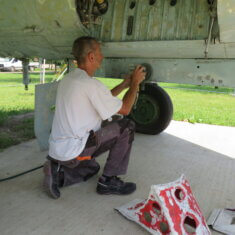 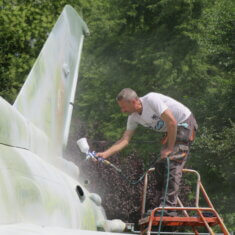 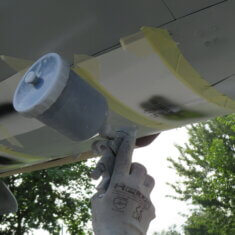 Masking the wheel bays and other parts and removing the tape took really a lot so we did it in a big team. Three of us also wanted to help the process so we put as many stencils as we could in the afternoon so the spraying can start first thing in the morning. 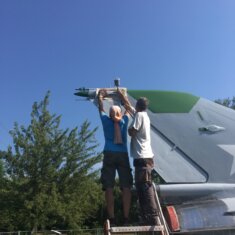 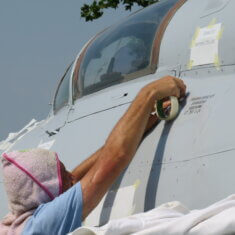 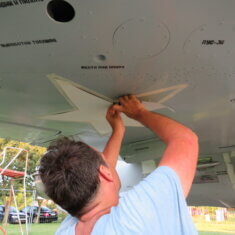 Besides the participants (owners and founding members of our collection), we are also grateful to the support we got from the local municipality (to build the concrete pad, the fence and the new cameras) and the tourist information office that provided support as well. Background work was also important, one of our founding members being responsible for it.

At the moment we are working on our own MiG-21MF (Fishbed-J) coded ‘9603’ and we are going to update this section with the photos and info along the way.